Know the History of your Solomon wrecks: The Guadalcanal Campaign

Following the Pearl Harbor attack (December 7, 1941), the Japanese Imperial Navy occupied scores of islands throughout the Western Pacific Ocean (Philippines, Thailand, Burma, Malaysia, Filipinas, Malasia, the Dutch East Indies, Wake Island, Gilbert Islands, New Britain in Papua New Guinea and Guam). Japan’s aim was to create a defense against the Allies attacks that would protect them and at the same time secure their mastery over East Asia and the Pacific.

After the United States’ strategic victories at the Battles of the Coral Sea (May 4-8, 1942) and Midway (June 4-7, 1942), expansion of the Japanese Empire stopped due to the loss of 4 aircraft carriers . The Japanese Imperial Navy was no longer capable of major offensive campaigns and the Allies could now start their own offensive in the Pacific.

For their first major offensive campaign in the Pacific against Japan, the U.S. chose Guadalcanal, in the Solomon Island chain. The Solomons represented the farthest reach of Japanese territorial control in the Pacific, and would be the first of many islands the U.S. would retake in a brutal three-year island-hopping campaign to battle and defeat Japan. ( to read more about the one in Truk Lagoon and Palau, read our post on the History behind the Operation Hailstone. )

The Guadalcanal Campaign, also known as the Battle of Guadalcanal and code named Operation Watchtower lasted six months and consisted of a number of major battles between both Titans —on land, at sea and in the air.

US forces first landed on Guadalcanal, Tulagi and Florida on the morning of August 7, 1942. After some fierce fighting during the following 2 days, the Marines cleared Tulagi and Florida. The main forces on Guadalcanal met little resistance on their way in land to secure the airfield at Henderson Field. Almost immediately, Japanese naval aircraft attacked transport and escort ships and Japanese reinforcements were sent to the area. Over the following days, the first of many deadly naval battles occurred— the Battle of Savo Island. The fight for control of Henderson Field and the seas around them continued for months with both sides continuing to lose men, ships and aircraft, but with no clear winner. But eventually, U.S. forces gained the upper hand and by February 1943, the Japanese withdrew their final men and surrendered the island to the Allies. 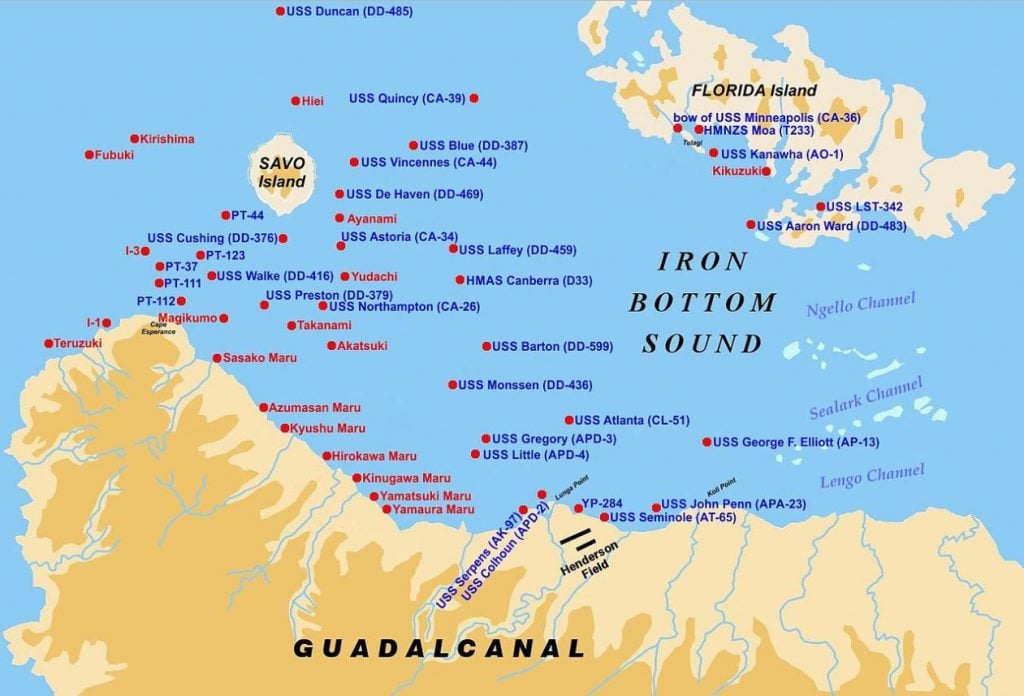 Even though the Battles of the Coral Sea and Midway were considered crucial, it was in Guadalcanal where the Japanese war machine was definitively stopped. After Guadalcanal, there were no more Japanese advances in the Pacific. Over the next two and a half years, the U.S. moved closer to Japan. Growing superiority at sea and in the air, as well as in the number of fighting men, gave the U.S. increasing advantages. Nonetheless, wherever U.S. forces met Japanese defenders, the enemy fought long and hard before being defeated, for instance in Truk Lagoon and Peleliu.

The Guadalcanal Campaign can be considered as unique for various reasons:
– Both US and Japanese forces fought at the far end of their supply limits.
– It was one of the longest battles in the Pacific campaign. Six months of savage and fierce fighting where the resistance of both sides was tested.
– The losses of ships at Guadalcanal were such that the waters of the north coast of the island are now known under the nickname “Iron Bottom Sound”. The Allies approximately lost 29 ships and 615 aircraft whilst the Japanese lost 38 ships and 683 aircraft.

If you would like to explore those shipwrecks and learn much about each one of them, come on board the Solomons PNG Master! We have some great itineraries that either only focus on the Iron Bottom Sound or mix them with the rest of the Solomons reefs and caverns! Contact us for further information!